“Litanies of Satan” by Diamanda Galas 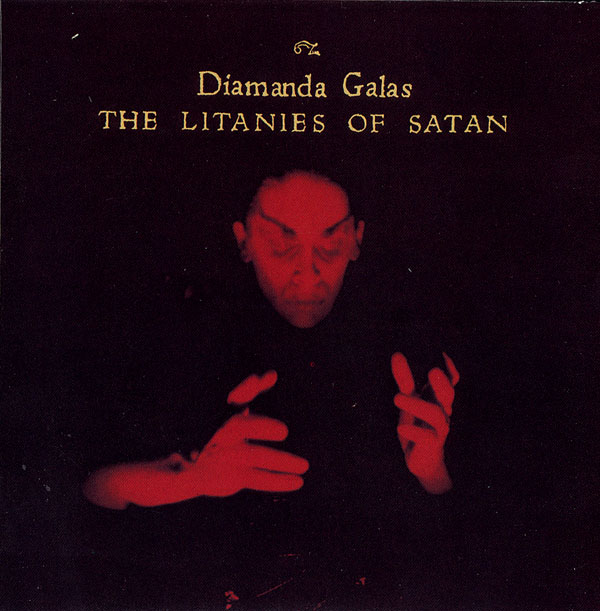 Now, to break up the monotony of reviews on either a) classic 60’s pop bands or b) classic 80’s-00’s era pop bands I will review one of the most avant guard performers to ever get a deal with a reasonably big record label and who pushed the boundaries with her vocal and instrumental intensity.

I am, of course, taking about Amy Grant.

Wait! No. I’m talking about Diamanda Galas. Does the name not ring a bell? That’s okay: her peak period was in the early 80’s to about the mid 90’s and she never hit any sort of commercial success.

That isn’t so say that she wasn’t infamous: former drug addict, prostitute, classically trained pianist who wrote album length mourning pieces to AIDS victims, the insane, beaten down women, marginalized prisoners and more she was also arrested for blasphemy for performing “The Plague Mass” nude from the waist up, shrieking “Sono L’Antichristo!” and being bathed in sheep’s blood in a CHURCH.

However shocking Galas may have been (she once remarked she wanted to “rape Snoop Dogg” in an interview and wrote a (playful and light hearted) song about women ganging up to kill a rapist male) she has always stood out amongst the crowd for her sense of righteous MORALITY not immorality. She cavorts, shrieks and shocks to bludgeon her audience with a stunning sense of right and wrong and of the amorality of the treatment of the victimized.

In other words, there’s always a POINT to her work beyond simple noise making. She’s saying something.

I realize I’ve gone 300 words without mentioning her singing voice. Galas was actually forbidden by her parents to study vocal work in college so she would perform her own unique style when she had the chance.

Basically, Galas has something like a four octave vocal range: she goes for the deep, dark spots when singing the kind of heart wrenching blues that make up her numerous cover albums. But she can also shriek (and I mean shriek) in a high, high soprano tone that should send shivers up and down the spine of even the toughest man.

And her vocalization goes beyond simple singing: she babbles, stretches out her vowels, strains her vibrato to the stretching point, gasps, grunts, mumbles and chants all for the sake of expressing the inner torment that lies not only in the heart of all of her work but within heart own heart.

That’s 408 words without mentioning the album, her debut album called “Litanies of Satan.” This album, released in 1982, was released before the moment that helped focus and define her career for decades: the AIDS related death of her brother, renowned playwright Philip-Dimitri Galas in 1986.

Diamanda and her brother were intensely close and influenced each others work and his death (the painful, dementia suffering wasting away that took early AIDS victims) shocked, troubled and appalled her in that nobody seemed interested in helping; millions of people turned their backs, plugged their ears and sang hymns as thousands and millions died agonizing deaths, murmuring under their breaths that perhaps these victims “deserved” their fates for their sexual deviancies (remember, AIDS was primarily thought of as a ‘homosexual’ problem at the time).

Okay, okay fine: that’s all great to know but what about this album? What is IT’S concept? Well, honestly, it’s basically an adaptation of “Litanies of Satan” by Charles Baudelaire, the celebrated decadent poet and semi-satanist. Naturally, he was Galas favorite poet.

This adaption is a 17 minute (not 12 as indicated on the CD reissue which messes up the titles of the TWO tracks on the album) tone-poem that…well, it truly sounds like the Demons of Hell are crawling out to Kill You.

It starts out with muted, looped Diamanda babble-screams that slowly build in intensity, overlaid with other sounds. Incredibly, she did this type of material live (with multiple microphones linked to various effects, leading to the incredible sight of her clutching three microphones and screeching) but one wonders about this particular track.

As it builds in intensity it eventually stops with a percussive “THUD” as a loud, slow, slow percussive beat begins. Galas begins reciting the poem in a mock demonic tone as if she is, indeed Satan Him (or Her) self.

Then she begins chanting a specific passage (I don’t know French) over and over again as deep, deep, bowel moving, pitch shifted voices layer underneath her basic chants as a synthesizer swirls in the background, low, deep and moaning.

Yes, there are variations throughout the track but this is its basic pitch: hellish, twisted, boiling, turning and sounding like a particularly GREAT horror movie soundtrack (as there are times when it locks into a truly scary groove) that mimics the ideas of the power of chants (Galas spends minutes at a time repeating key phrases) the hair raising power of a true, guttural shriek and the seemingly instinctual revulsion at deep, deep bass tones.

It keeps doing this till the end.

The second track, “Wild Women With Steak-Knives (The Homicidal Love Song for Solo Scream)” (seriously) couldn’t possibly live up to that as the looking effects are minimal and its mostly just Diamanda screeching out insane lyrics about wanting “steak! Steak steak steak steak steak” and exploring the furthest possible limits of her voice.

So is this worth hearing? I think so but with some serious reservations. If you’re a religious person this may somewhat offend you (but I think you’d have to be pretty fundamentalist for that to occur) or may even truly terrorize you as a truly satanic work.

It may also give you a headache.

But if you’re looking to get into some of the most “out there” music released in the last 40 years, you could hardly go wrong with ANYTHING by Galas. Later albums bring in more music, more composing and even a weird flirtation with “rock” starring John Paul-Jones that got her onto late night television.

However, her basic sound, approach and singing styles are completely realized on this debut. Listen it with the lights off.

Honestly, you can find the whole album on YouTube. Give it a listen. You can even find her performing this LIVE though the quality is shoddy at best.