Edwin Oslan touches on the existence of white supremacist rock bands (don’t worry, he’s against them, as is everyone on the site) focusing specifically on a rather…odd band’s interactions with the king of scum sucking white supremacist lunatics: Tom Metzger.

Note: I initially wrote this piece before doing full research. After I did I found that Nicholas Schreck had made a couple of appearance on Tom Metzger’s show and expressed disturbing views that seem to suggest he supports some form of white supremacy along with his wife Zeena (daughter of Anton LaVay).

Shortly after, they formed the Abraxis foundation and staged a Satanic/Fascist rally on 8-8-88, renounced any Social Darwinist viewpoints and became Buddhists. While it’s touching to know they allegedly no longer follow a fascist mindset, that didn’t stop them from releasing a Radio Werewolf CD called The Vinyl Solution, containing a bunch of outtakes and still acting like a couple of humorless, pseudo-intellectual buffoons.

Oh and if you want Nicholas Schreck to give you religious mentoring, feel free to send him $100 for his hour long mentoring sessions!

Dangerous Minds posted an article on Facebook about when it seemed okay for goth groups to go onto white supremacist Tom Metzger’s cable access show Race and Reason. I was already aware that Boyd Rice dabbled in fascism. He has never blatantly made it clear which side he stands on; he never expressed any particular hatred for any group of people yet at the same time apparently enjoys praising some of history’s most notorious offenders under the assumption that might makes right. His music has been released by big level independent labels like Mute and he has a relatively large following in the neo goth/noise/neo folk electronic scene, where lot of those people blatantly express racist views.

Furthermore it should be noted that these aren’t like your standard Neo-Nazi skinheads who sing hardcore punk or metal songs about killing minorities. These so-called “neo goth/noise/industrial” groups consider themselves artists and intellectuals who reject liberal ideals and justify the atrocities committed on humanity as the natural order of things.

However, the early industrial scene was all about transgressing moral taboos. Throbbing Gristle wore military uniforms and sang songs with names like “Zyklon B Zombie,” sang about the Moores murders, “the hamburger lady” and performed a called “United” which quotes various serial killers.

Is it art? Eh, I dunno. I like reading true crime books too so, I can’t say. These artists were dark and disturbing but never appeared racist.

Boyd Rice’s appearance on Metzger’s talk show and his association with “racially aware” groups like Skrewdriver and Death In June caused many to dismiss him as a racist. But then again, his music is usually a bunch of experimental noise. The piece he did with Current 93 was actually pretty cool to these ears. I can’t say if he’s a racist or some bogus “social Darwinist” but this leads me to the whole point of this article: Radio Werewolf. 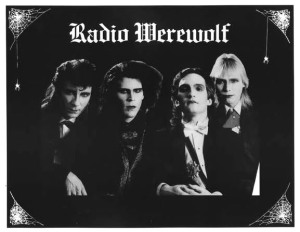 It’s a good idea not to take them as seriously as they take themselves.

When Radio Werewolf appeared on Race and Reason, I was completely prepared for members Nicholas Shrek and Evil Wilhelm to make statements similar to Rice about being “racially aware” and explaining the different ways to indoctrinate the youth. But I got something so much better!

I’d never heard of Radio Werewolf prior to seeing this clip but I immediately downloaded the album The Fiery Summons after finishing the video. Hearing Shrek sing the phrase “the final cleansing” should raise a red racist and fascist flag.

However, the entire album is a minimalist collection of minor chords played on church organs with Nicholas Shrek moaning about “the circle being complete” and “the werewolf order” in what can only be described as a “vampire” voice.

In fact “March of the Werewolf Order” has no music; it’s just Schrek chanting a strange werewolf anthem. It’s both silly and tedious.
So, when Nicholas Shrek and Evil Wilhelm appeared on Metzger’s show, they gave him possibly the greatest interview I’d ever seen. The whole scenario is bizarre. Like I said, I thought Shrek and Wilhelm were going to talk about “racial identity.”

First of all the appearance of Schreck and Wilhelm should immediately cause a chuckle; both are completely pail and dressed like vampires. Wilhelm has a monocle which he keeps adjusting over the course of the interview. Oh, that’s right; HIS NAME IS EVIL WILHEM!!! At first I thought he was just born with an unfortunate name. But clearly that’s not the case.

During the interview, Schreck (German for “terror”) describes the “Werewolf Order” and how they plan on recruiting the youth through their music. Schreck’s instrument is the “licanthropicord” and the group doesn’t perform gigs; they hold Werewolf Youth Party meetings. This is all punctuated by the fact that Schreck is speaking with a straight face the entire time and Wilhelm occasionally chimes in to clarify.

When asked when the group started, the answer is, “in 1984, the year of the werewolf.” The group’s purpose?; “to define and spread fear and terror” and to” weed out the weak.” Are they Nazis? Nope. They are beyond Nazis and other mortal labels. When asked who can join their “order”, they say, that they decide the criteria of who joins.

But they never define any criteria!

Does this guy meet their criteria?

Needless to say I thought it was one of the funniest things I’d ever seen. Now Tom Metzger is obviously a horrible human being with vile beliefs but it was amusing watching him look confused while trying to make heads or tails of the bizarre duo.

Were they white supremacists? They never said so! They said they are beyond such mortal labels! My guess is that these guys are having a laugh.

It should also be noted that when Nicholas Schreck appeared on an episode of Sally Jesse Raphael addressing Satanism, his performance seems a lot less staged. He could very well be a Satanist and made some vaguely controversial statements about Charles Manson and Hitler. Watch this clip on Sally and let me know what you think! His part starts about halfway through but you might enjoy looking at Anton LaVay’s attractive daughter first.

Culture Fusion has a new writer, Edwin Oslan, who will be contributing on Wednesdays. This is where I would normally go in-depth on what the writer is going to cover and their own style but Edwin helpfully provided this solid little self introduction. Tomorrow, I’ll post the first part of his epic Hawkwind discography review. That’s right: he’s doing all of them. He’s nothing if not incredibly ambitious (and he and I share a name: one of my middle names is Edwin…)

This is NOT Edwin.

I’m Edwin and I like weird music, old horror, cult and exploitation films and reading old E.C. comics like Tales from the Crypt, The Vault of Horror, The Haunt of Fear, Weird Science and Weird Fantasy along with Warren magazines like Famous Monsters of Filmland, Eerie, Creepy and Vampirella. I collect things and like drinking. People think I need to write about something just so they don’t hear me talking about it so much.

The name “Savage Hippie” comes from a Melvins song. When asked about this in an interview Buzz Osbourne said that the song was a reference to Alice Cooper, Charles Manson and other long haired freaks from the late 60s and early 70s who may have emerged from the psychedelic era but did not share in the hippie ideology. After all it was Alice who said his group put the stake in the heart of the love generation. Also my friends Sarah called me a hippie once because of all the “psychedelic rock” I listen to.
You know there was punk rock once but the most unfortunate thing about it is that certain journalists give the impression that before the first Ramones album came out, the musical landscape was completely baron (excepting the Stooges, MC5, New York Dolls, etc.) and that, I feel is utter nonsense.

This is NOT an album about Hunting Edwin.

Aside from the bizarre notion that the punk rockers only listened to five bands, it’s clear just from John Lydon’s vast musical taste that there was so much interesting music available at the time. Sure, there were was corporate rock and arena rock and bands that played 20 minute guitar solos and sang about nothing but that doesn’t paint the whole picture, does it?
Thanks to John Lydon and Mark E. Smith name dropping their favorites, I got into (in no particular order) Hawkwind, Can, Captain Beefheart, Miles Davis, Lou Reed, the Pretty Things, the Monks, the Move, the Creation, the Other Half and the Groundhogs. And through those I found about so much more in the sub-sub-genres of psychedelic, prog, Krautrock, early heavy rock, proto punk and proto metal and who knows what else. There is also something called Zuul, which is seems pretty cool.
I like a lot of music but one thing that I’m absolutely addicted to are nicely packaged CD reissues – I know vinyl rules, blah blah, I buy a ton of that as well – but I love when you get a really nicely designed package with extensive liner notes, photos and extra tracks, so that the original issue of whatever is expanded to like three times its length with b-sides, outtakes, demos, live versions and the whole thing. And thankfully reissue labels like Castle/Sanctuary, Akarma, Cherry Red/Esoteric/Reactive/Atomhenge do this beautifully, making a bunch of old, obscure and ultimately weird bands available again.

This is NOT a terrible movie about Edwin losing his mind as a horror movie editor.

Anyway, I digress. Although, I don’t know what from since this all seems like one long rambling piece with no particular direction but, I guess, the point I want to make is that I like music and writing about it. Also that I find the pre-punk era often times more interesting than the punk era. The old idiom holds true that in the spirit of “no rules,” they created lots of rules, didn’t they? That’s probably why I lean towards the weirder side of punk and post punk and experimental stuff.
So, then, it seems weird that punk introduced all of this chaos when prior that, the late 60s seemed a lot wilder and weirder. Plus, again, there’s a notion that the 60s was all peace and love. But, come on; biker gangs, satanic cults, bad trips and well, you get the idea.
Again I don’t really know where I was going with this. According to Frank Zappa the freaks in Hollywood were way freakier than the hippies in San Francisco. Oh, and I don’t plan to talk about the Stooges, MC5, Alice Cooper, David Bowie, T. Rex (though I might write about Tyrannosaurus Rex) and New York Dolls too much since that’s been covered ad nauseam. These are all great mind you but you don’t need another blog telling you about this stuff. If you don’t all three Stooges and MC5 albums, both New York Dolls albums and the classic Alice Cooper band stuff, then I really can’t help you. In fact, nobody can; you fail.

This is NOT an 33 printed by an Indian version of Edwin. I’m not sure WHAT the hell this is.